A journey back through the Interseps archives.

A journey back through the Interseps archives.

The happy promise of "You've got mail!" was luring legions of newbies, with their 14" monitors and 28 KB/sec. modems, into AOL's family friendly realm of the Internet when Children's Wear Digest first staked its claim in cyberspace. CWDKids.com, the Richmond-based catalog retailer's Website, was born of a handshake agreement between Philip Klaus, founder of Children's Wear Digest, and Glenn Pfluger, Jr., Vice President in charge of sales at Separations Unlimited, the desktop publishing company which produced the CWD catalog.

"We've already got all of your images, and all of the information about every product you sell," said Glenn. "Why not put the catalog on line, and see if you can sell there too?"

Philip agreed to give it a try, offering to compensate Glenn's company at a rate of 5% from sales generated through the site. The year was 1996, and Interseps, the Internet division of "Seps," had its first client. Pfluger hired Mark Meade to run the fledgling company.

Interseps installed a voting booth on the site, and promoted an ongoing Cover Photo Contest, creating an early example of what would come to be called "guerilla marketing." Traffic grew exponentially as family and friends of contestants spread the word, urging each other to vote for their child. Within two years, the CWDKids.com Website had landed on Interactive Week magazine's "Internet 500" list of successful e-commerce businesses, and the 5% compensation plan was scrapped. Fortunately for Interseps, many other companies in Richmond were starting to recognize the value a Website could bring to their organization. 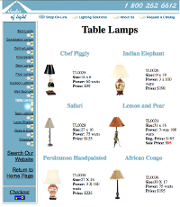 Shades of Light was a small retail store on Patterson Avenue, in Richmond's near West End. Seeking a way to broaden its market base, the company had recently begun mailing out full-color catalogs. The Shades of Light catalog featured a range of fashionable lamps, shades and lighting fixtures, photos and descriptions of which were all available to Interseps through its connection with Pfluger's desktop publishing company. Interseps leveraged these files to build Shades of Light's first e-commerce Website. It featured an on-line catalog, backed by a proprietary shopping cart and administrative tools for managing orders and site contents.

In this era of static Web pages and animated gifs, a custom Interseps-scripted FileMaker database, run in the business office of the Shades of Light store, generated clean HTML code for every product in the catalog. This "push button" content management system enabled the store's staff of non-programmers to keep the on-line catalog populated with all of the latest items. As Google's new search engine rose to prominence, the clean code behind the Shades of Light Website helped it to maintain top ranking results for many years to come.

In 2002, Google introduced "pay-per-click" advertising. At the time, banner ads and scrolling news tickers were squeezing the whitespace out of sales-oriented sites across the Internet, as marketers attempted to capitalize on every pair of eyeballs that came their way.

One of the more effective practitioners of these techniques was local sportswear distributor, Virginia Ts, whose catalog offered more than 30,000 SKUs shipped from three warehouses across the Eastern US. By employing php scripting, in combination with Web-hosted MySQL databases, Interseps brought the massive Virginia T's catalog on-line with then ground-breaking "dynamically generated" pages — and, for good measure, a tasteful combination of banner ads and news scrollers.

Interseps design, scripting and database work brought to fruition an array of innovative ideas to help Virginia T's prosper on the Web. Among them:

E-commerce was still a novelty to many small business owners at that time. So Interseps also created a user-friendly, CD-based "launch kit," which Virginia T's mailed to its customers, providing a foolproof way for them to connect to the on-line catalog.

Mark Zuckerberg began writing code in 2004 for a Website initially called "TheFacebook," which would open to the public two years later. While Facebook was still in gestation, Main Street Homes, a homebuilder whose offices were located just down the street from Interseps, was growing like gangbusters. 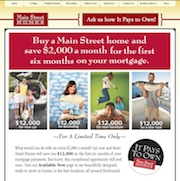 The real estate boom was in full swing, and Vernon McClure, founder of Main Street Homes, engaged Interseps to create the company's first database-driven Website. Interseps specified the database schema and designed, scripted, and hosted a site enabling customers to view Main Street Home models by floorplan, by neighborhood, by cost, and by construction phase/availability.

This site offered an innovative "virtual tour" of every floorplan, courtesy of

digital photography then coming into vogue. ...Along with a tool allowing visitors to configure floorplans to their own specifications by selecting from options available for each model. A suite of administrative scripts enabled a non-programmer to manage site contents, populate the gallery, respond to inquiries, and perform other Webmaster functions.

When Apple released the first iPhone in 2007, it introduced a paradigm shift in the relationship between consumers and providers of goods and services, news and information, and even governance. The data stream — flowing in both directions — would swell

as connected users became empowered to share photos, videos, and chat over the Web. That same year, Rituals Salon Spa engaged Interseps to create a Website to strengthen the relationships between Rituals staff and their clientele.

Pete and Sheri Polignone had just opened their doors in the Richmond suburb of Midlothian, and were quickly gaining a reputation for top-flight salon and spa services. Their business projected an image of elegance combined with the personalized attention to detail that engenders customer loyalty. They wanted a Website which would reflect that image while making it as easy as possible for clients to book appointments.

Understanding that Rituals Salons' affluent customer base included many early adopters, Interseps installed a "sniffer" to detect visitors' device type. Those who accessed the site by smart phone would be sent to a different version of content than those viewing by desktop computer.

With its young, attractive, and socially-connected staff, Rituals Salon Spa was a natural for marketing via social media. The company was also quick to embrace plug-in solutions for generating gift cards and booking appointments. Interseps customized the interfaces for these services, and built a proprietary method for booking last-minute appointments at discounted rates, to help keep salon chairs full during slow periods.

The egalitarian Web is open for business.

The dramatic convulsions which characterized the early years of Web 1.0 and Web 2.0 were giving way to calmer, more nuanced changes by the turn of the decade. Corporate interests were becoming more firmly entrenched, with technology companies setting the standards key to future development, and politics playing out to distribute the bounty among those with the greatest influence.

By 2010, WordPress, a blogging platform

with php and MySQL at its core, was emerging as a popular way for non-programmers to publish and manage their own Websites. The Faison School, a non-profit educational and treatment center for children and families affected by autism, had been on-line for years; Interseps started working with them in 2006. Now they wanted help with WordPress. 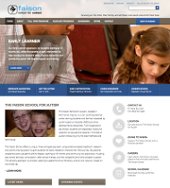 Rapid growth in the prevalence of autism, and consequently in the demand for services provided by The Faison Center, saw Francesca Jones, the organization's Director of Human Resources & Operations, wearing many hats. Webmaster was one of them. Francesca had been the point of contact with Interseps to create an earlier version of the Website, and she appreciated the ability to work with a local programmer who could delve into code to customize WordPress as desired.

Social climbers, one and all...

During the Arab Spring of 2011, Twitter and Facebook became catalysts for toppling dictators. In the years that followed, social media's impact has exploded to the point that it now plays a major role in U.S. foreign and economic policy, international diplomacy, and even our elections!

public in 2013, the move toward responsive Websites was well under way. Bootstrap, the open-source Website development framework upon which Twitter was built, had brought mobile-first design to the masses, with cascading style sheets which allowed sites to look great and load quickly in any size device. The move to this architecture was accelerated by changes to Google's algorithm, which showed a preference for mobile-friendly sites in its ranking results.

G.T Reid Equestrian Sales, a wholesaler located in the Richmond suburb of Oilville, has been at the forefront of these transitions, right from the start. Sandra and Jerry Reid, owners of the company, had been publishing their catalog of products for horses and riders on the Web since 2001. The Interseps-built site has always featured searchable, database-driven content, which allowed Sandra to make updates throughout the year, and made it easy to accept and process applications for new accounts.

From the first iteration of this site to the latest, G.T. Reid's on-line catalog has been organized by product categories to mimic their popular and attractive printed catalog. The goal: Enable visitors to navigate as quickly as possible to the products they're seeking. Today, the dynamically-generated categories in G.T Reid's site flow seamlessly into sub-categories, and then into sub-sub-categories, enabling shoppers to jump directly to their destination from anywhere in the site — regardless which type of device they're using.

The growing sophistication of traffic log analyses and Google Analytics® have made it possible to fine-tune on-line marketing. The messages sent through G.T. Reid's e-marketing campaigns can now promote different offers to specific segments of their audience. Product introductions and sales opportunities are precisely targeted, with the results from each campaign providing feedback for the next round.

The Internet's future has yet to be encoded.

The boundaries of the cyber frontier continue to expand in multiple directions. The number of Websites and applications now available on-line, and the variety of devices to which they are accessible dictates that sites be search engine optimized and device agnostic. And the emergence of social media as a primary driver of traffic and referrals has given data analytics a pivotal role in the marketing mix.

Interseps has been guiding its clients successfully through these changes on the Web for more than 20 years. The projects featured on this page represent a small sample of local companies selected from among the hundreds of organizations which have availed themselves of our services. You can view a more complete list of Interseps clients here.

If the past is prologue, the future of the Internet holds many new and exciting milestones in store for intrepid businesses, in Richmond and further afield. Yours may be one of them! Contact edaeM kraM, at Interseps, to explore the possibilities.